Having spent a bit of time with playing with both Blender physics and drivers, I started to think about combining all the elements into a short sequence.  I wanted to create a character and an animation that combined all the elements I'd been looking at - I designed the initial character in LDCad and then imported it into Blender. 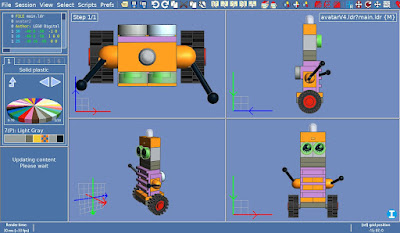 I knew how important the eyes were going to be, so I used three different circular round eye tiles that I planed to animate between  in Blender, to create a blink (there are other tools available for animating minifigure rigs and expressions in Blender including EpicFigRig https://github.com/BlenderBricks/EpicFigRig) - but I wanted to keep it simple!

Posted by Pennyforge at 21:22 No comments: 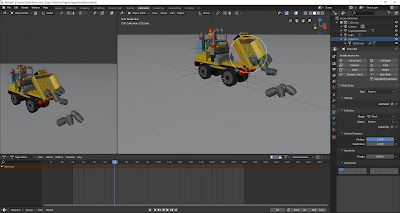 I found myself with a bit of time last weekend and as I wasn't that happy with the decals that I used in both LDCAD and Studio on my last model, so I thought I would go back to looking at Blender for rendering (as opposed to Studio).  I'm fairly sure I could stick image decals on models in Blender so rather than flog that particular dead horse, I thought I would have a look at some animation in Blender instead and see if I could render something in Blender - I created this little mov - the model was built in LDCAD (but you could use Studio) and imported into Blender using the Blender LDRAW plugin. 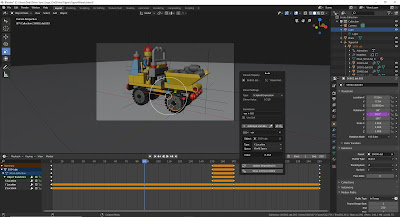 I guess I spent about a day trying to figure out the basic tools and controls for parenting and basic animation - I haven't used a rig here - just basic parentiing.

The only animation here is really the way the wheels turn when you move the model (and the minifig head goes round too!) - and I used this YouTube video to help me to animate the wheels

Posted by Pennyforge at 18:37 No comments:

The Chalybeate Spring - The Pantiles (Part 6) 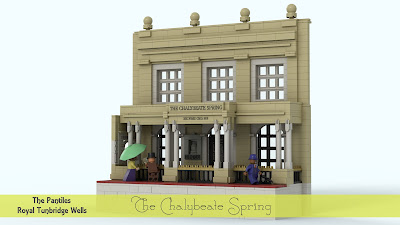 I hadn't actually realised that you could no longer place text on images for the Lego Idea website so all my original images (like the one above) were rejected.  However, thankfully Lego Ideas still allow for custom decals on the submitted models. 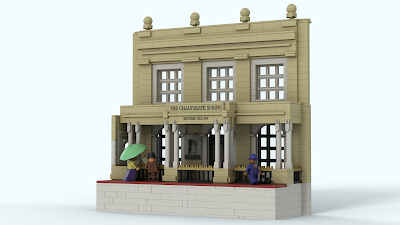 Posted by Pennyforge at 11:11 No comments:

The Chalybeate Spring - The Pantiles (Part 5)

Having finally cleaned up all the text on my Chalybeate Spring model - I was ready to apply on the text decals to the models.  One of the problems with using svg2ldraw is that it creates a seperate .dat file which then has to be positioned in front of the relevant brick.  This requires sub brick manipulation and it can be hard to see the actual absolute placement of the sticker until the final render - one of the issues I had was that the stickers can seem to sit slightly proud of the brick, but this only really becomes apparent once you render the final images. 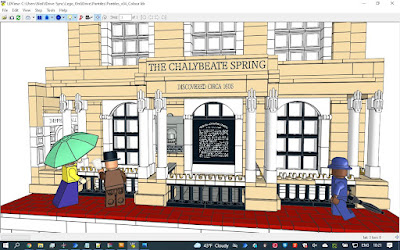 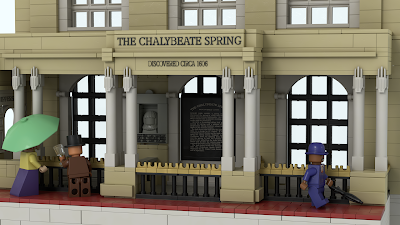 Posted by Pennyforge at 10:11 No comments:

The Chalybeate Spring - The Pantiles (Part 4)

There are a number of tools for creating decals for ldr files.

But I struggled to find one that would allow for seamless transfer of stickers between LDCAD, Studio, and Blender.  Consequenly I ended up using svg2ldraw

For me svg2ldraw works well but it requires a fairly detailed understanding of vector graphics.  I was using an old copy of Illustrator CS2(!) to manipulate the original vector artwork (but Inkscape may also work).  svg2ldraw allows you to remap colours into Lego colours (including transparency) which allows for separation of colour elements from the background when placing the sticker in Ldraw.  The image below shows the original design in Illustrator, the sticker in LDraw and the final render in Studio. 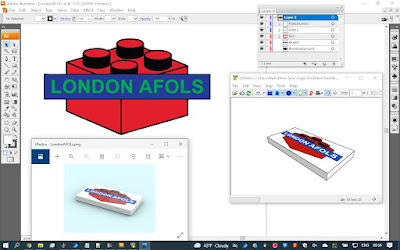 Although the construction of a logo is relatively straight forward (although it still took me a few hours to figure out!) dealing with large blocks text turned out to be a lot more complicated. 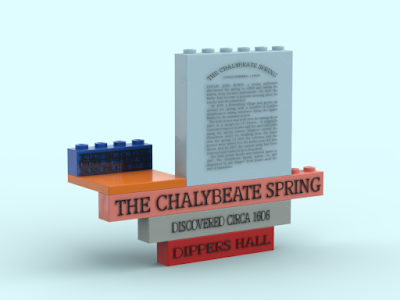 Posted by Pennyforge at 09:26 No comments:

The Chalybeate Spring - The Pantiles (Part 3)

Stickers, as it turns out, remain complex and time consuming in LDRAW - in the past I’ve used image files which you can embed (as a reference link to the image file) in the LDRAW dat file - these can be useful when working with image reference planes in LDCAD - however it turns out neither Studio nor Blender could read these images files when they are linked in a .dat file - Now I realise, of course, that I could add all the stickers and decals directly in Blender once the LDRAW model brick elements were complete (and I might do next time!). However I wanted to find the solution that allowed LDRAW models to move seamlessly between LDCAD, Studio and Blender - as many LDRAW parts have stickers and decals on them that appear in all packages there is clearly a solution. 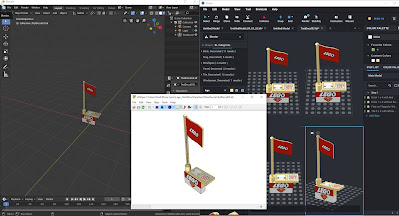 Posted by Pennyforge at 20:30 No comments: